The accuracy of clinical tests of this nature is generally characterized by several separate metrics, including:

These concepts are illustrated in this video. 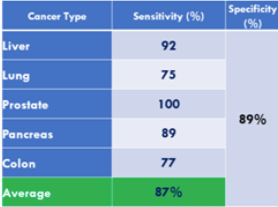 There are hundreds of reports in the scientific and medical literature assessing the performance of the biomarkers in OneTest™ for various cancers, alone and in combination.

In what is perhaps the most comprehensive study of these biomarkers from a real-world screening setting (i.e. Testing of individuals prior to diagnosis of cancer), involving over 41,516 study participants over 15 years (published in 2015), it is concluded that using the panel of biomarkers in OneTest™ (based on any one marker in the panel above its threshold; no algorithm) at a specificity of 88.7% the sensitivities of detecting liver cancer, lung cancer, prostate cancer, and colorectal cancer was 90.9%, 75.0%, 100% and 76.9% respectively. By biomarker the following sensitivities were found (at 88.7% specificity):

Table 1*. Sensitivities of the individual tumor markers for each malignancy.

As pointed out elsewhere in this document, the comparison of sequential testing with single time point measurements is the best way to maximize the value of these biomarkers. That is, the change in levels of the various biomarkers over time is expected to give the most valuable information for predicting the appearance and progression of cancer.

When evaluating the diagnostic accuracy of the tumor antigens measured in OneTest™ single time point measurements significantly undervalue their potential. Rather they should be evaluated based on serial testing over time. As one of the world’s foremost experts in tumor antigens stated:  Physicians in the clinics and health check centers that routinely test these biomarkers tend to repeat tests of biomarkers that are above the cut-off or otherwise ambiguous as part of the overall patient examination. One of the world’s foremost experts in tumor markers offered the following “rule of thumb” for sequential testing:

“An isolated finding of high levels of any tumor marker is of limited value. When there are doubts regarding a result, two or three sequential measurements should be carried out at intervals of more than its plasma half-life (15-20 days for the majority of tumor markers). If the tumor marker values show a continuous increase over the period (above the normal level), it can be concluded with a high level of probability that it is of malignant origin, as it reflects the growth of tumor. Conversely, if the serum level does not change or show a downward trend, the origin should be sought in another non-malignant condition.” (R. Molina, 2013, Clinical Value of Tumor Markers, Roche Diagnostics)

The following evidence demonstrates sensitivity improvements when the trajectory of these markers is measured over time.

In a pre-diagnostic cohort (PLCO) levels of CA19-9 increased exponentially starting at 2 years prior to diagnosis with sensitivities reaching 60% at 99% specificity within 0-6 months prior to diagnosis for all cases and 50% at 99% specificity for cases diagnosed with early-stage disease. Hanash et al. Lead-Time Trajectory of CA19-9 as an Anchor Marker for Pancreatic Cancer Early Detection – PubMed (nih.gov)

Based on serial PSA measurements, the use of the MLE-PSA model significantly (p-value < 0.0001) improves prostate cancer detection and reduces the need for prostate biopsy.  JDS-1173.pdf (jds-online.com)

CEA levels increased towards diagnosis in a significant proportion (1/3) of colorectal cancer (CRC) cases (half of late-stage cases), static in both benign and non-cancer controls. Combining CEA with other biomarkers (e.g. CA-19.9) further improves detection capabilities for CRC according to various studies.   https://www.ncbi.nlm.nih.gov/pmc/articles/PMC4506388/

Throughout East Asia, tumor antigens are routinely tested as part of yearly health checkups. 20/20 GeneSystems obtained real-world data from a cohort of 135,236 individuals tested with at least four of the tumor antigens in OneTest™  (AFP, CEA, PSA, CA19-9, and CA 125) at a large hospital in East Asia of which 433 were subsequently diagnosed with cancer. The test sensitivity and specificity improved the more times the subject was tested.

The machine learning algorithms are expected to substantially improve accuracy over time as additional data (including many clinical factors) from both American and Asian populations is incorporated, especially from individuals who take this test on a yearly basis.

As of mid-2018 the OneTest™ biomarkers are assayed using the Roche Cobas e411 immunoassay analyzer with Roche IVD biomarker detection kits that are FDA approved for use in detection recurrent cancer in previously diagnosed patients.

We would love to hear from you. Please complete the form below and we will get back to you as soon as possible.