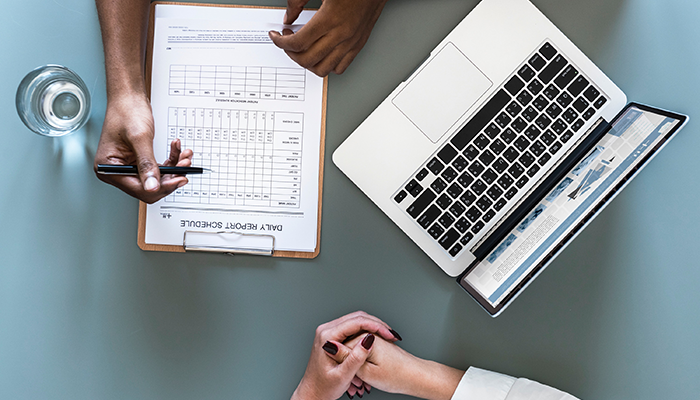 For most cancers, early detection can mean the difference between life and death!

With lung cancer–the world’s #1 cancer killer–the survival rate exceeds 90% when the cancer is detected through screening while still small and confined (stage 1) according to a landmark study published in the New England Journal of Medicine. On the other hand if lung cancer advances to form multiple, distant tumors (stage IVb) survival rates fall to below 1% according to the web site of the American Cancer Society.    Dozens of similar studies have concluded that for pancreatic, colon, kidney, ovarian, and most other tumor types, early detection offers substantial survival benefits.   The biomarkers measured as part of OneTest (AFP, CEA, PSA, CA 19-9, CA 125, CA 15-3, and CYFRA 21-1) are significantly associated with the presence of different malignancies and have the potential to detect cancers at the early, more curable stages while patients are still asymptomatic.

Everyone middle age and older could benefit. Aging and random DNA copying mistakes (not family history or lifestyle) cause most cancers. 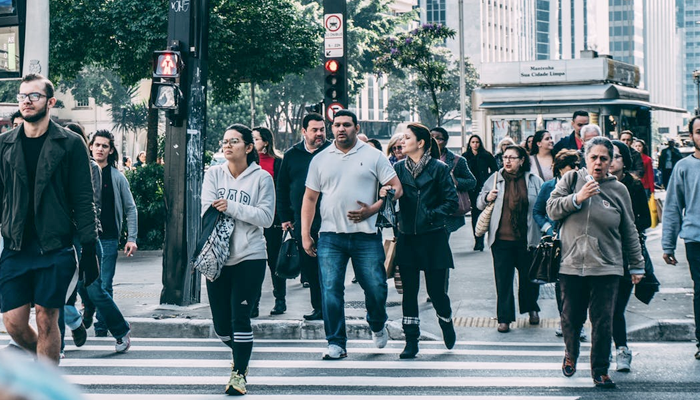 Most people incorrectly assume that family history, lifestyle, and environmental exposures are the leading causes of cancer. However, a 2017 reported study by leading cancer geneticists from Johns Hopkins found that among all tumor types, 66% of the genetic mutations that lead to cancer come from random mutations over a lifetime, 29% from lifestyle or environment, and only 5% from genes inherited from parents.

Thus, even those who have little or no family history of cancer and who lead a healthy lifestyle would be wise to routinely test for cancer. This is the standard practice in Japan, Korea, China and throughout the Far East where nearly all adults, starting at about age 40, undertake day-long annual health checks“that usually include blood tests of many of the same protein biomarkers that are part of OneTest.

How often to should one be tested? 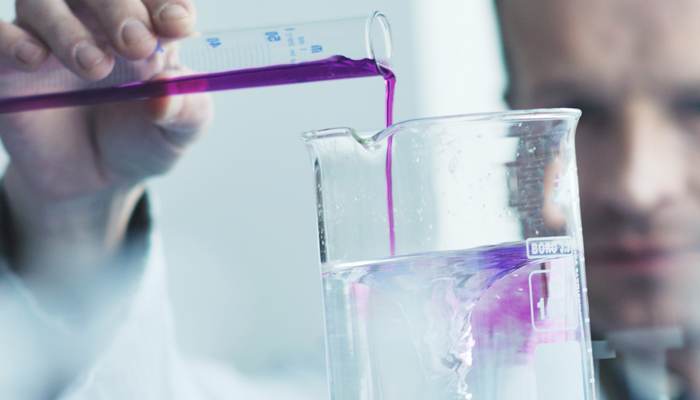 Since increase in biomarker levels over time has been demonstrated to be a better predictor of cancer than single time point readings, many experts in regions where biomarker cancer screening is commonplace believe that yearly testing is the optimal way to improve early stage detection rates. Furthermore, as we monitor the one-year outcomes of OneTest customers, we expect the machine learning algorithm to become increasingly more powerful and accurate when we modify it with longitudinal outcome data providing further benefits to those who undertake annual re-testing.

How does OneTest Work?

OneTest is a blood test and machine learning algorithm that was developed to aid in the detection of multiple cancers before symptoms occur when treatments are usually more effective. 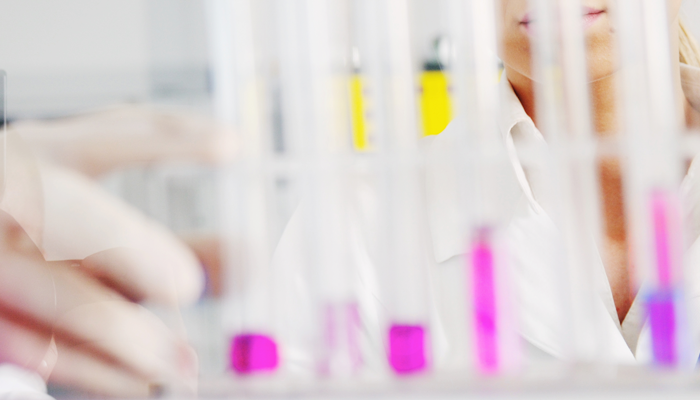 The foundation of OneTest is the measurement of a panel of protein biomarkers. OneTest is not a genetic test that predicts your lifetime risk of cancer. Instead, it measures a group of tumor-associated proteins secreted by tumors as they grow. These biomarkers have been widely used for cancer screening outside of the U.S., especially in the Far East (Japan, South Korea, China) for over two decades. In that region, tens of millions of individuals receive what are often day-long health check-ups that include blood tests that measure the levels of the same biomarkers that are part of OneTestTM.

A unique feature of OneTest is the incorporation of machine learning algorithms to improve the performance of biomarker testing alone. Machine Learning is a form of artificial intelligence (AI) in which a computer system has the ability to continually process and incorporate new data and thus fine tune its output over time. Because the algorithm used to combine biomarker levels with relevant clinical factor data is derived from machine learning, this algorithm is amenable to periodic review and redefinition.. By leveraging additional data from the US population and expanding the number of clinical factor predictors, we expect to improve the accuracy of the OneTest algorithm over time.

OneTest customers who permit us to use their biomarker levels, clinical inputs, and cancer / non-cancer outcomes for further algorithm development will eventually help improve the health outcomes of those who subsequently take the test.

What is Unique and Advantageous about OneTest? 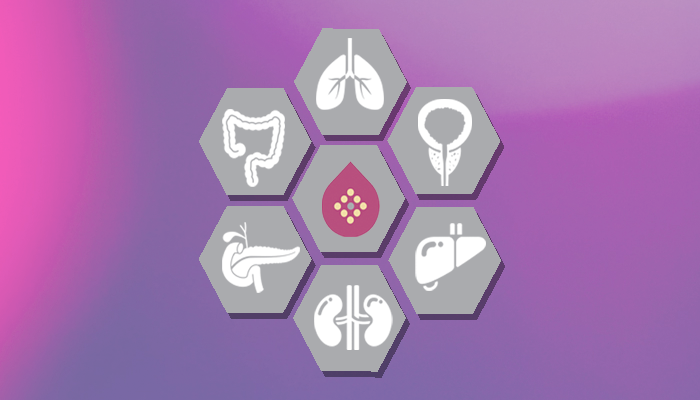 What is Unique and Advantageous about OneTest?
It can help with early detection of lung, liver, pancreas, and other cancers that are not widely screened for in the United States.
Although screening for all the major cancer types has been widespread in the Far East for decades, most Americans are routinely tested only for colon cancer, plus breast and cervical cancer for women, and prostate cancer for men. OneTest is one of the first blood tests available in the USA that simultaneously screens for different types of cancers including those of the lung, liver, pancreas, ovaries, kidneys and others.

We measure tumor proteins (not genes) which help detect early cancer today, not in the future.
Many popular DNA testing companies today offer not only ancestry analysis but also tests for inherited gene abnormalities that pre-dispose the consumer to various diseases. Such tests have very limited value for early cancer detection since recent studies have confirmed that fewer than 5% of the genetic mutations that cause cancer are inherited. Instead most cancer-causing mutations result from random DNA copying errors over time.

Beyond inherited genetic mutations, research is underway by many to study whether circulating tumor DNA in the blood (“ctDNA”) may be useful for early cancer detection. It will likely be several years before it can be determined whether ctDNA biomarkers are complementary or even superior to protein biomarkers. 20/20 and its research collaborators will be looking at the future potential of circulating tumor DNA and plan to collect and save excess blood samples from as many of our customers as possible for this very purpose.

Our algorithms already provide better accuracy that is expected to continually improve over time.
We use machine learning to compare biomarker levels and other characteristics such as age and gender with a vast database of 28,000 subjects tested over the past 12 years. This approach has been demonstrated to help detect nearly twice as many cancers as biomarker testing alone. (See Accuracy, Reliability & Scientific Support for more details.) While the current algorithm is fixed on the basis of rigorous studies performed to date, 20/20 GeneSystems, Inc. is committed to the performance of regular review of the algorithm as the existing patient dataset grows.As with some popular traffic & navigation apps where a community of drivers share real time road info to alert other drivers to traffic & road conditions, OneTest users who permit us to incorporate their biomarker levels, clinical inputs, and cancer / non-cancer outcomes help improve the health outcomes of those who subsequently take the test.

OneTest is powered and validated by real-world data from asymptomatic individuals.
Most biomarker-based cancer tests are developed and validated using stored laboratory blood samples from cancer patients. The purported accuracy of these tests usually drops considerably when they are later used in a real-world screening setting (i.e. individuals without signs or symptoms of cancer).

OneTest was developed and validated based on one-year outcome data from about 28,000 individuals screened over 12 years at a leading research hospital in Taiwan. This data set will grow and integrate results from our American consumers. 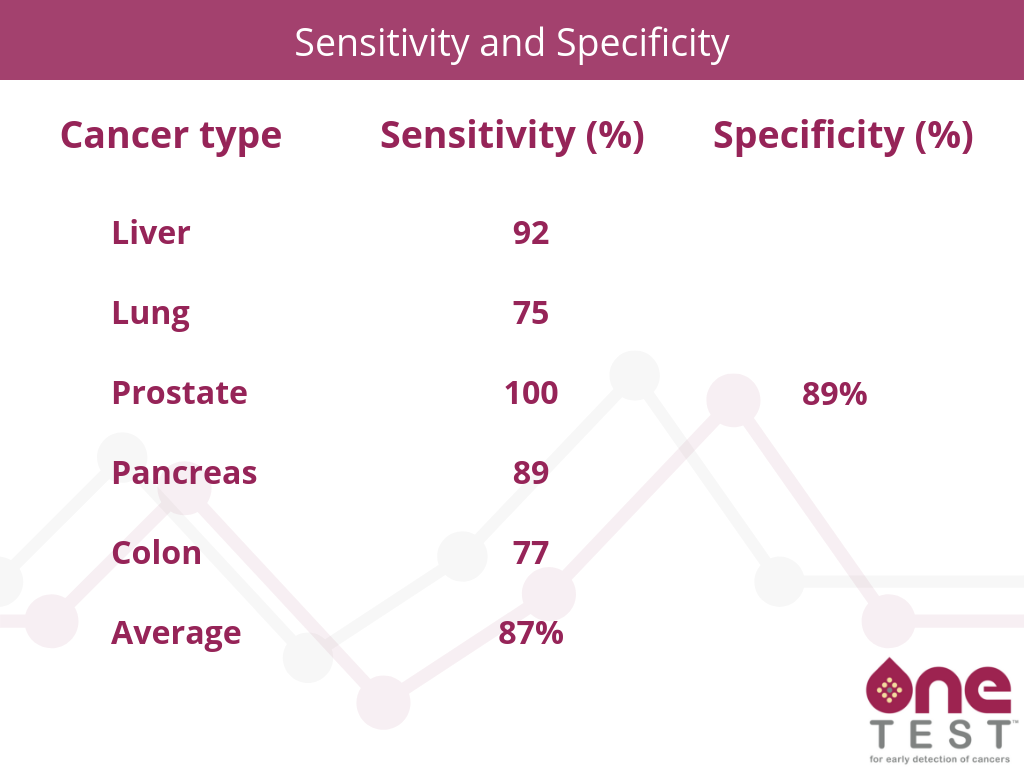 The accuracy of clinical tests of this nature is generally characterized by several separate metrics, including:

Accuracy of Biomarkers Alone.
There are hundreds of reports in the scientific and medical literature assessing the performance of the biomarkers in OneTestTM for various cancers, alone and in combination.
In what is perhaps the most comprehensive study of these biomarkers from a real-world screening setting (i.e. testing of individuals prior to diagnosis of cancer), involving over 41,516 study participants over 15 years (published in 2015), it is concluded that using the panel of biomarkers in OneTestTM (based on any one marker in the panel above its threshold; no algorithm) at a specificity of 88.7% the sensitivities of detecting liver cancer, lung cancer, prostate cancer, and colorectal cancer was 90.9%, 75.0%, 100% and 76.9% respectively. By biomarker the following sensitivities were found (at 88.7% specificity):
Table 1*. Sensitivities of the individual tumor markers for each malignancy.

As pointed out elsewhere in this document, the comparison of sequential testing with single time point measurements is the best way to maximize the value of these biomarkers. That is, the change in levels of the various biomarkers over time is expected to give the most valuable information for predicting the appearance and progression of cancer.
Accuracy of Algorithms.
Together with our Taiwanese collaborators, we have generated compelling evidence that machine learning algorithms that integrate clinical factors (e.g. age, gender, etc.) with biomarker levels substantially improve accuracy over biomarker levels alone. 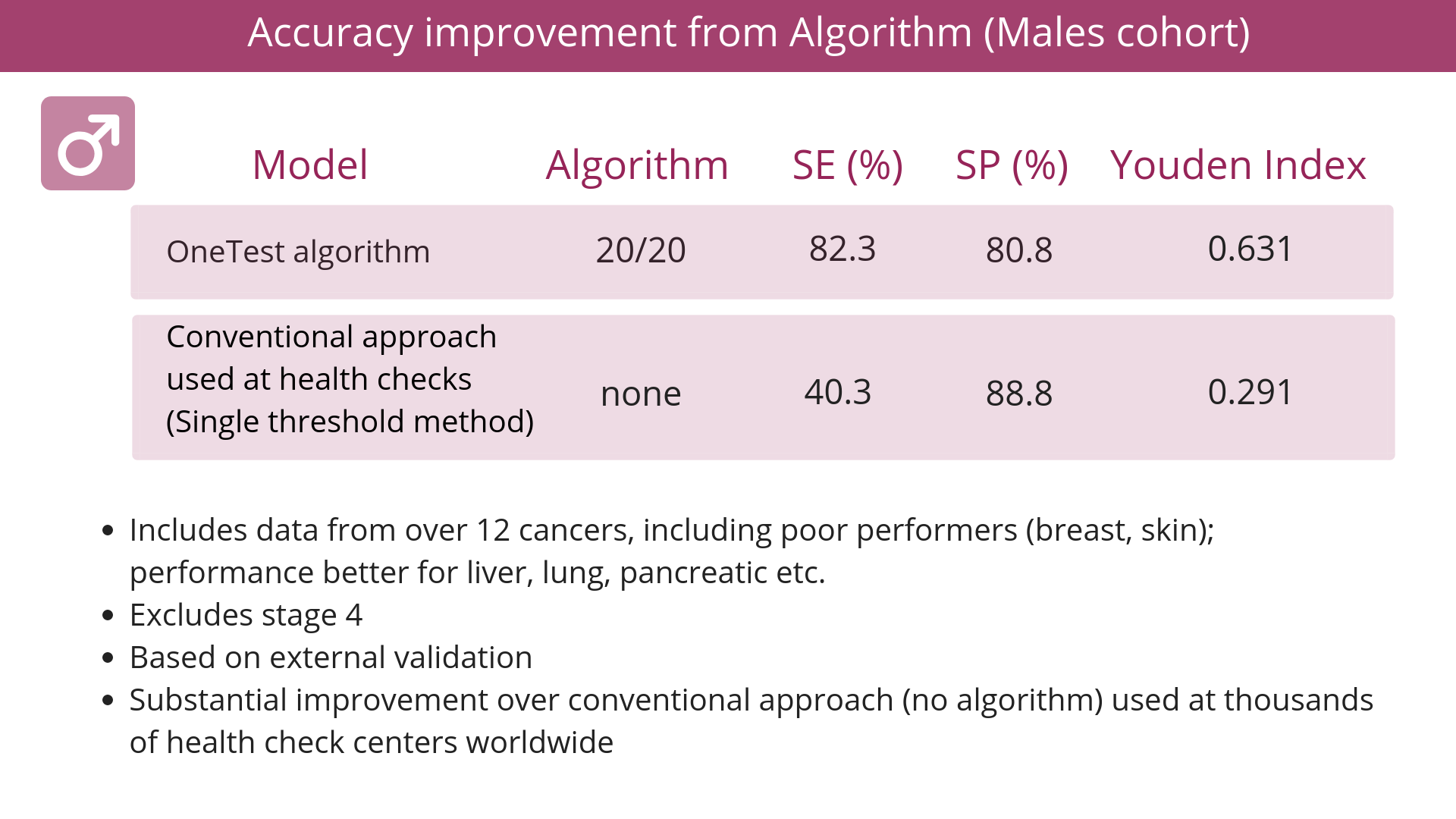 The machine learning algorithms are expected to substantially improve accuracy over time as additional data (including many clinical factors) from both American and Asian populations is incorporated, especially from individuals who take this test on a yearly basis.

As of mid-2018 the OneTest biomarkers are assayed using the Roche Cobas e411 immunoassay analyzer with Roche IVD biomarker detection kits that are FDA approved for use in detection recurrent cancer in previously diagnosed patients.

Additional technical and scientific details may be found here.

Summary of Strengths & Limitations of Test 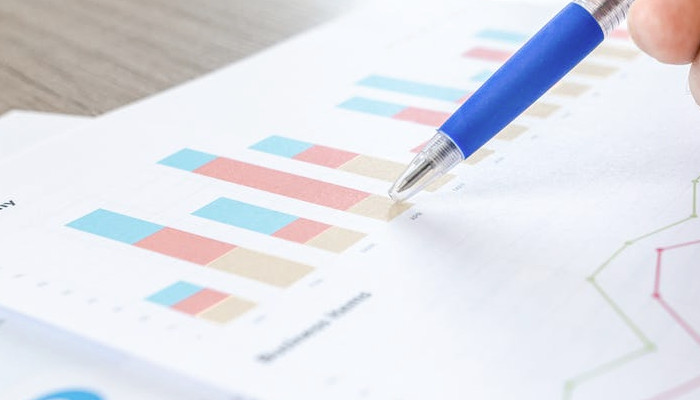